Andrew Wyeth is a representative of 20th century American painters.

He is a writer who has continued to draw the object with the utmost respect for people, things and nature.

His work is all about looking at the neighbors who live their lives in a very limited place, without omitting them.

Among his works, there is a group of works called “Helga series”.

A series of “Helga series” depicting a woman for 15 years. 240 works including watercolors, dry brush works, tempera, pencil drawings, and drawings! This group of works was cultivated between Wyeth and Helga without being seen by anyone in the family, let alone close friends, until the end. At the same time as the announcement, a great deal of interest was drawn to this group of works. (It seems that some of the content was quite scandalous, but I think it’s nonsense.)

This time, I copied the series masterpiece “Lovers” by Andrew Wyeth (1917-2009), one of the writers who had a great influence on me now.

“Dry brush” is one of the techniques represented by Wyeth’s style. (It is written as drive rush. When I first learned this word, I remember looking for it at an art supply store, “What kind of paintbrush?”) Wipe off the water from the paintbrush and imprint it on the unevenness of the paper. It is a method of drawing. The feature is that it can create an atmosphere like a fine woven fabric combined with the freshness of watercolor. There are times when I use this technique in my work, but this time I wanted to deepen that technique and tried to copy this wonderful work.

To effectively express a dry brush, watercolor paper needs to have moderate unevenness. This time, Wyeth also used the “Fabriano paper” that he always used in his work. I mainly used the “Van Gogh” flat brush, which has moderate elasticity. It is especially often used for outside landscapes and Helga. I was able to express the atmosphere of the work by mixing various colors intricately.

Dry brushing is a laborious and time-consuming task. Therefore, it doesn’t seem to be a popular technique in Japan. I don’t see any technique books that introduce in detail. A closer look at the work reminds us that its realistic style is backed by the artist’s “observation eye” and the “technology” that expresses it.

I was wondering if this was the first time by the window, but this is the fallen leaves brought by the breeze. This pose looks like Helga during a break. Her expression is relaxing and thinking about something. A piece of leaf that was blown in at that time. Suddenly, Helga raised her face and tried to catch the leaf in the air. Wyeth commented that she wanted to capture the moment on the screen. I remembered that moment and carefully finished this work.

I think the great thing about this person is that he doesn’t miss a casual moment. I thought he was a person who had an antenna in every detail.

~ What you can see by copying ~

Many of Wyeth’s works are really famous. I think that what he has drawn throughout his life is “realism” while facing the lives and lives of people who are very close to him and nature.

This does not mean that it is as realistic as in the photograph, but is it possible to feel the universal “strength of the core” in everything that is the subject of the work, and to express it while removing unnecessary parts as much as possible? I think I was facing my work like that. The artist’s perspective and speculation that can be seen by observing carefully. Every time I put in a brush, new discoveries and fresh joy. I also make it as if I were in that space and became a Wyeth. I had such an illusion somewhere. It was like sharing the inner part (secret) of the writer.

The title “Lovers” was given by Wyeth’s wife Betsy.

(She is always the inspiration for Wyeth’s work and the partner who manages all of his work.) When I see the mysterious shadow on the left side of the screen, I feel the presence of an invisible person nearby. It seems that it was attached.

A full-scale copy of Wyeth. It was my first challenge, but I felt a mysterious feeling that I wanted to keep writing brushes forever. By copying, I was able to know a lot of things, and it made me feel like I could follow his gaze and feelings while looking at Wyeth’s work more deeply. And drive rush. -This technique seems to have a great effect on my future work. I want to draw my work carefully, regardless of time or restrictions. It’s something I’ve always dreamed of. This may be realized through this copy. It made me feel excited and irresistible. If you have a work by your favorite artist, I recommend you to copy it at least once. You will surely feel the expansion of your own view of the world. 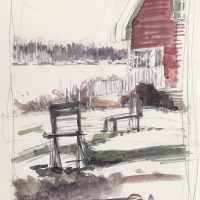 Behind the creation “From sketch to work” 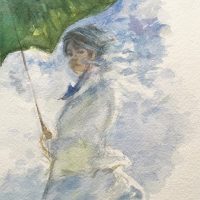